The Malecón is near the top of my list of favorite places on Earth. It is a uniquely fantastic coordinate in space-time, and walking down it at dusk is like a gift from the universe.

This five-kilometer seawall runs across the top of the city and then continues down along the inlet into Havana Habor. You can go there any time of day and find Habaneros hanging out: couples relaxing on the seawall, fisherman casting their lines, kids swimming, musicians jamming. It’s a 24-hour party, and one of the city’s defining features.

Unfortunately, every time I encountered this beauty, I had only an iPhone. So my pictures of it are rather unimpressive. Also, it’s five kilometers long, and unless you are out in Havana Bay looking back toward the city, it’s hard to capture its magnificence.

But here are a few of the sights I did manage to capture—many of them taken on our free Sunday morning when I walked from the Hotel Nacional all the way down to the port. And with these pictures, I’ll now shut up.

You see a lot of broken-down cars in Havana 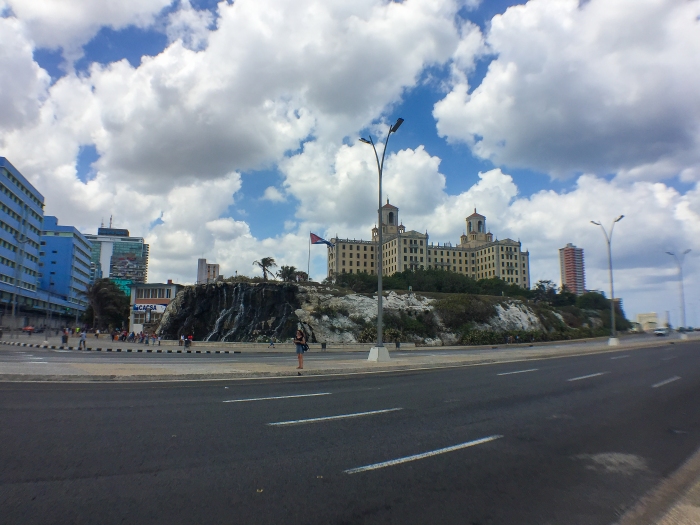 The Hotel Nacional seen from the seawall

Fisherman are a permanent presence along the Malecón: From the corner of the Malecón at the top of Habana Vieja, you get a nice view of the Morro Castle:

Some boats in the inlet and harbor: 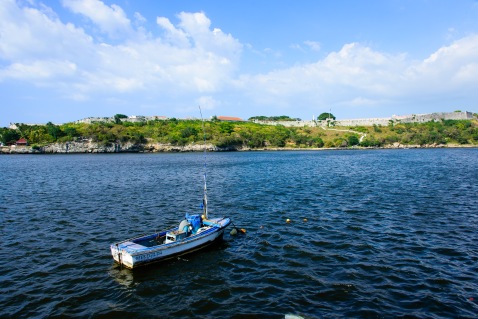 A giant statue I came across while walking down the Malecón:

“You’ll only be happy once you learn to distinguish the permanent from the temporary.”

Posted on July 30, 2017 by Brandon in Uncategorized

A long tree-lined promenade after the European style, the Paseo del Prado divides Habana Vieja from the newer Centro Habana. Originally built in the late 18th century, it was redesigned in the 1920s. But after the 1950s, and particularly after the Revolution, the buildings along the Prado began to dilapidate.

Today, parts of the Prado have been restored—particularly around the Parque Central, where there are a number of well-known hotels, include the Telégrafo (where I stayed), the Hotel Inglaterra, and the swanky Parque Central Hotel (where my group met for lectures on Cuban history and culture). 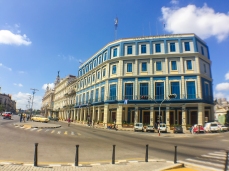 Lobby of the Hotel Parque Central 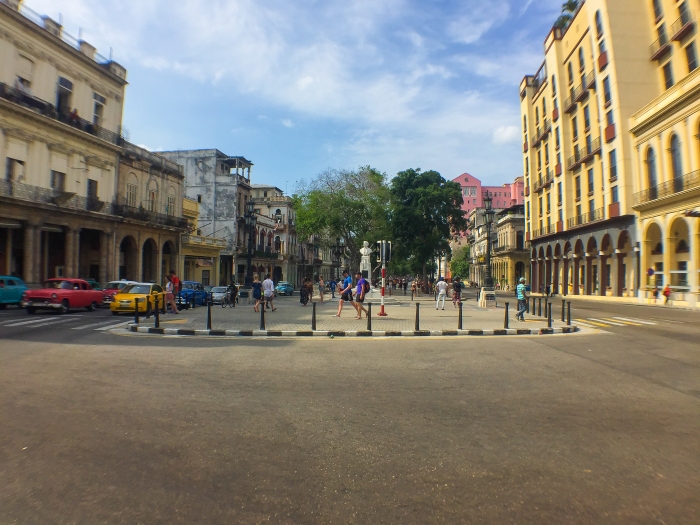 View from a paladar just across the Prado from our hotel 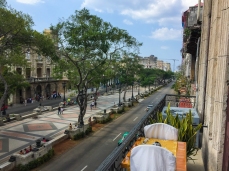 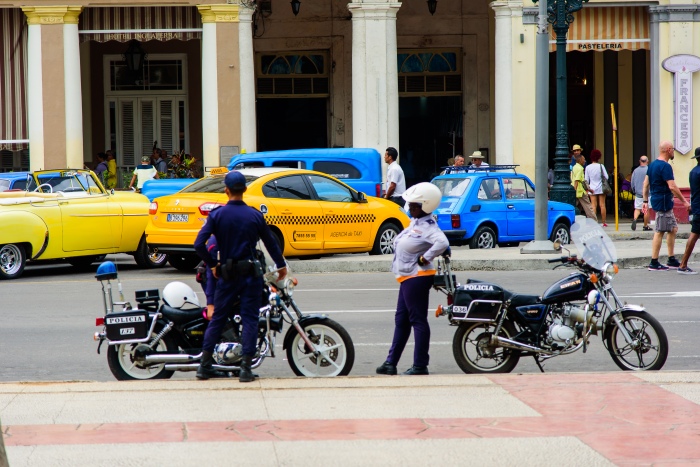 In one of his lectures, Tim Weed told us of his attempt to find the pre-Revolution U.S. embassy in Havana. Some clever gumshoe work and squinting at photographs led him to the address, which today is an Alliance Française building. A few days after he delivered his lecture, I stumbled upon the building myself.*

*The new U.S. embassy is in Vedado, right off the Malecón, in what was formerly the United States Interest Section run by the Swiss embassy. It appears our current president is far more likely to keep Guantánamo open than he is this diplomatic hub. 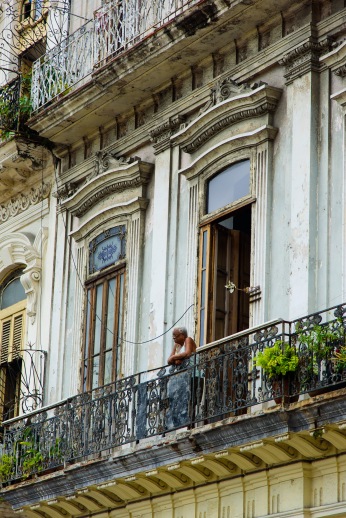 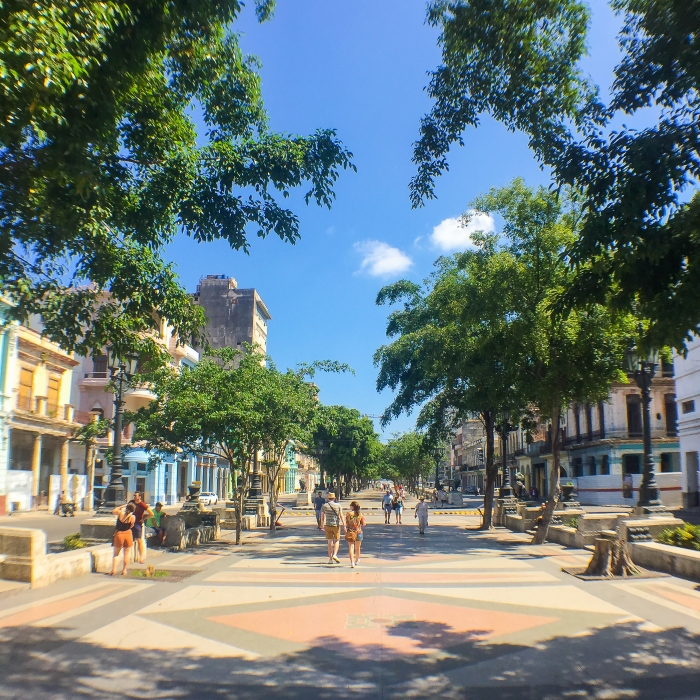 The Prado runs all the way up to the Malecón. The seawall skirts the Havana and is my favorite part of the city. It’s also our next stop …

You will go to Habana Vieja. Old Havana … You’ll go there and you’ll say, “This is exactly what they said I’d see.” And you’ll see just what they said: The crumbling pastel façades. The narrow and uneven streets, crowded with onion vendors and kids kicking flat footballs. The feral cats and dogs*, the vintage cars.

*My workshop partners specifically made fun of my overuse of the word “feral” in my workshop piece. They were right. But, ladies, here they are. (Click for full-size versions.) 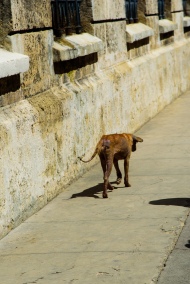 The old town is tucked into the corner formed by Havana Bay and the long inlet to the harbor. The Spanish built fortifications (the Castillo de los Tres Reyes Magos del Morro and the Fortaleza de San Carlos de la Cabaña) on the far side of the inlet to defend the town from higher ground. Along the edge of Habana Vieja runs the Avenida de Maceo, better known as the Malecón, a five-mile seawall and multilane roadway.

All of Havana spreads out from this colonial core. As the city grew, it crept westward into the areas now known as Centro Habana, Vedado, Miramar, etc., each successively newer than the last and with its own architectural identity.

Habana Vieja will look very much like the pictures you’ve seen in books and online, where all the colors seem too bright. But it really is that oversaturated, and that vivid.

Of course it’s also a tourist trap. From one end of the Calle Obispo to the other, the residents have transformed their foyers into shops hawking postcards, straw hats, and trinkets. And this has been a great boon for them. There are take-out restaurants no local person would ever frequent or could ever afford—but which provide a lot of local jobs. 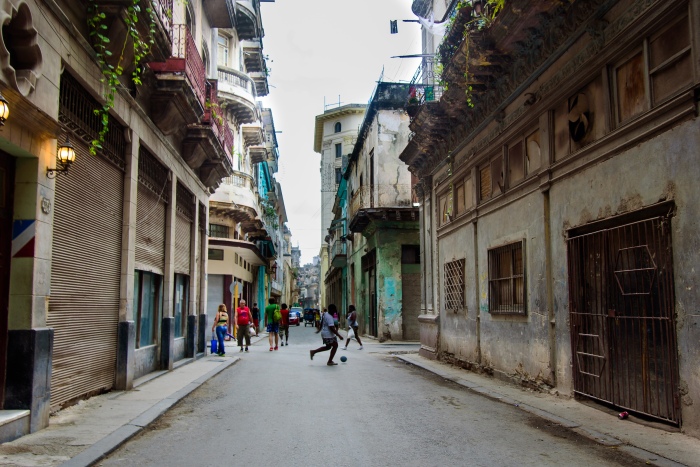 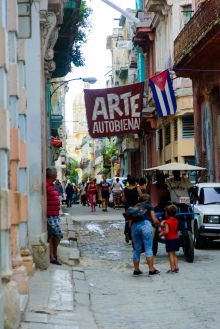 And then there’s the onslaught of Hemingway pilgrimage sites: La Floridita (home of the daiquirí and favorite watering hole of drunk Papa—a bronze idol of him now warms his spot at bar’s end), La Bodeguita del medio (the supposed birthplace of the mojito and another alleged Hem haunt, though this has been called into question), the Ambos Mundos (Ernesto’s former flop pad before his loaded second wife, Paula, insisted on an estate outside of town, which we’ll soon visit). 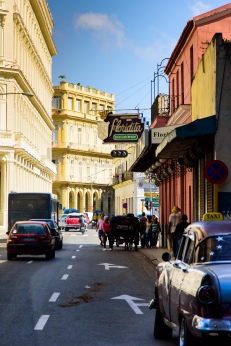 My first glimpse of Old Havana came on the evening of our arrival. A few of us had spent the afternoon tooling around near the Capitolio building in Centro Habana. But for dinner we bussed over to a paladar called La Moneda Cubana, just behind another old Spanish fortification: the Castillo de la Real Fuerza.

As night fell, we walked through the Plaza de la Catedral, and from there all the way up the Calle Obispo to our hotel, the Telégrafo—stopping along the way for some añejo rum and live music. 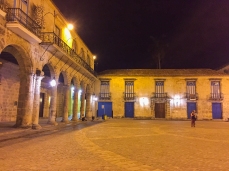 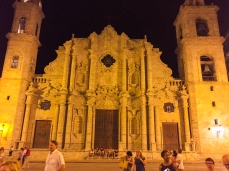 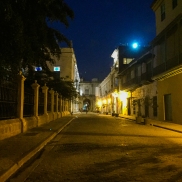 The Hotel Telégrafo and Hotel Inglaterra on the Parque Central

The next morning, we took a bicitaxi tour around Centro Habana and Habana Vieja. (I’ll save the Centro Habana pictures for a later post.)

Tim noted that while this might seem like the most touristy thing you could do, it actually provides a bit of cover—you go by so fast that the locals hardly notice you gawking around every corner and snapping pictures.

My bicitaxi driver told me that he’d noticed a distinct increase in business toward the end of the Obama years. There’s been a lot of foreign visitors since Castro opened the island to tourists during the so-called Special Period after the collapse of the USSR, but he said that the influx of Americans resulting from the loosening of travel restrictions had brought a flood of income for hard-working, pedal-pumping men such as himself.

Let me pause a moment to talk about this guy’s profession. He pedals a two-seat rickshaw attached to a single-gear bike around a tropical city for ten hours or more a day. He makes a pretty good living doing this compared to the average professional in Cuba. But he busts his hump to convey his clients across those potholed streets.

And this is the guy that the new American policy will hurt the most. The Castro regime (Fidel, who’s dead; Raúl, who’s announced his retirement in 2018), those guys survived the Período especial. They’ve lasted through 60 years of the embargo. I don’t see how stopping cash payments to private paladar and casa particular owners or bicitaxi drivers is going to topple communism on the island.

Over the past several years, American tourist money has also greatly increased the amount of restoration work in Habana Vieja. Construction cranes are everywhere, and as you pass open doorways or dilapidated buildings, you see people making repairs. 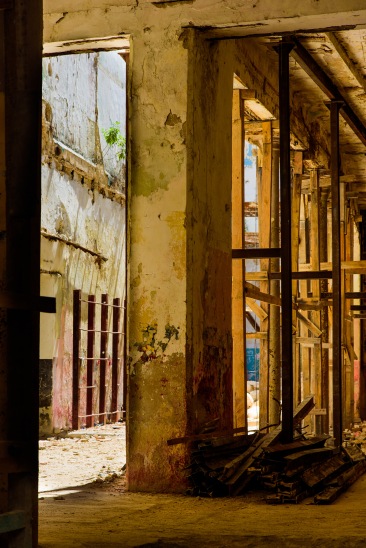 That morning, we stopped at the Plaza Vieja, another of the five main squares in the old city. On the northeast corner stands a building with a cámera oscura at the top, based on the designs of Leonardo da Vinci. For small fee, visitors are given a nice panoramic view of the entire city. You feel like you’re looking at still photos—until you notice, say, a worker walking across a rooftop or a bird swooping past. 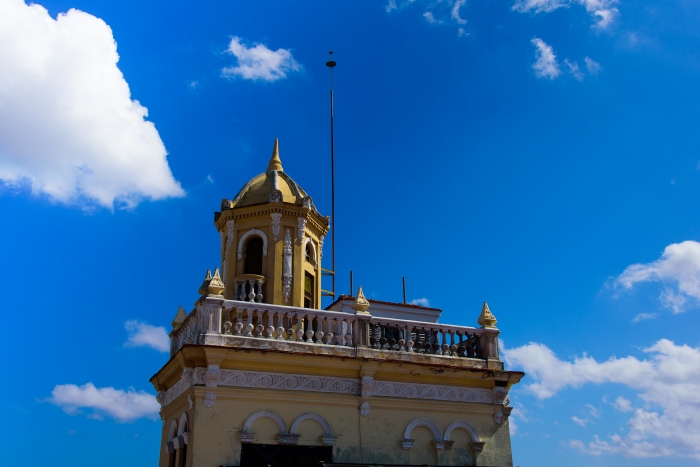 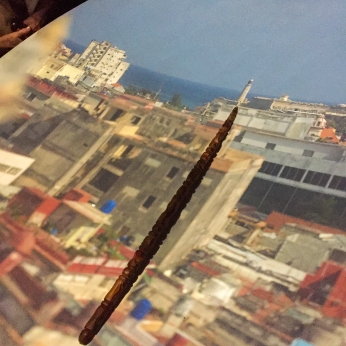 While the others sat on the terrace of the Café El Escorial, a well-known establishment on the southeast corner of the old square where they take an inordinate amount of time to roast and prepare your coffee, I split off to take a few more pictures. 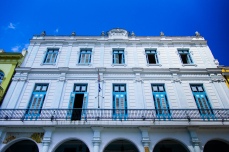 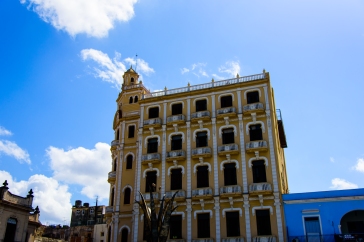 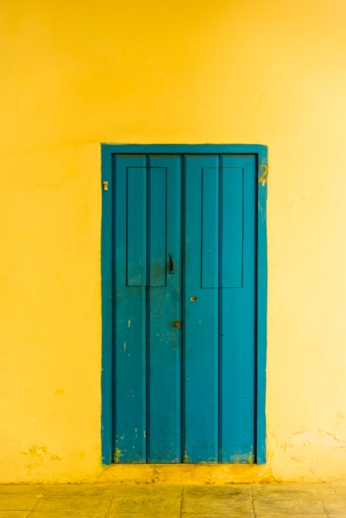 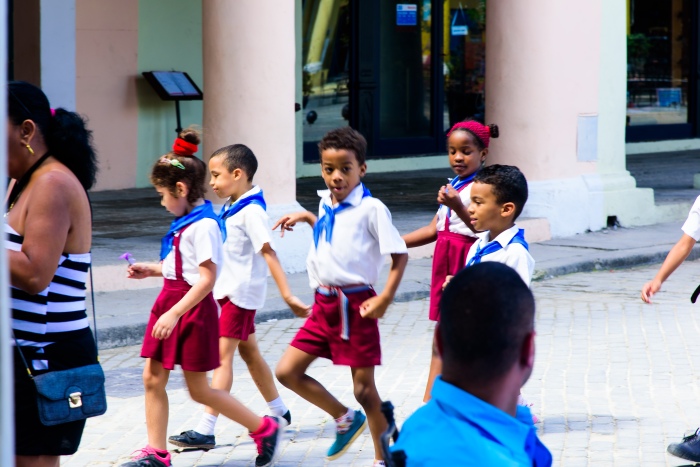 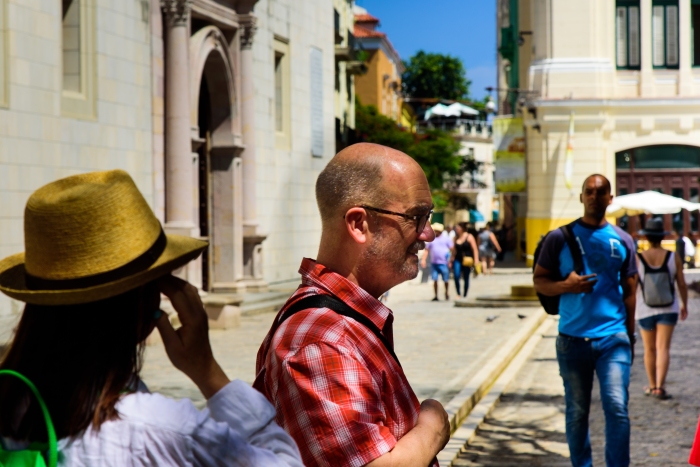 V. Hansmann on the Plaza Vieja 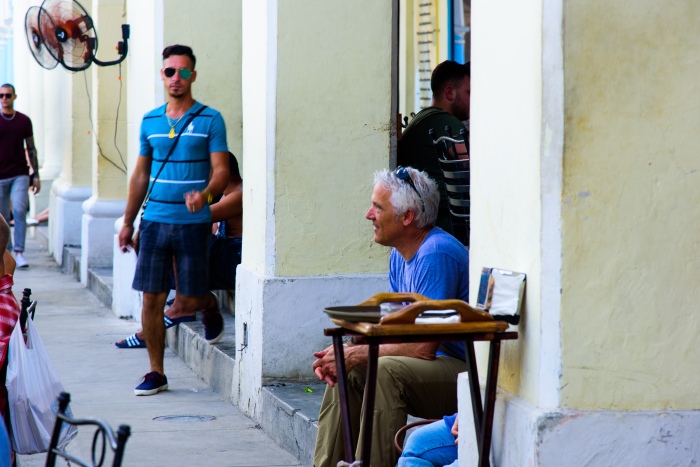 The group then headed back to the Plaza de Catedral. One of the highlights of the morning was a visit to the Taller Experimental de Grafíca, a printshop tucked into a dead-end alley off the plaza. In the large open workspace, artists set type and produce reductive linocuts, woodcuts, and lithographs.

Though we didn’t make it there that morning, I later came back to explore the Feria de publicaciones y curiosidades just off the nearby Plaza de Armas. Until recently, this book and curios market was in the plaza proper (and that’s where Casey finds it in my novel), but it was recently moved. 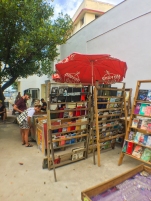 Next, we’ll move on to the Paseo del Prado, the wide promenade that separates Habana Vieja from Centro Habana.